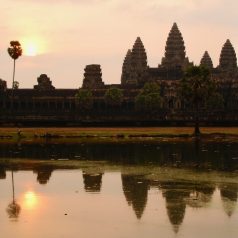 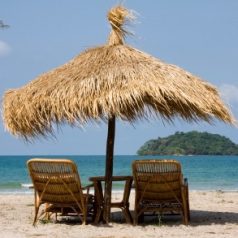 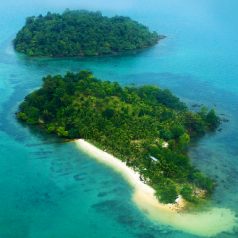 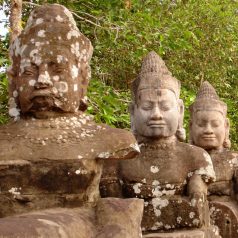 Cambodia is now firmly on the map for adventurous tourists with 2 million annual visitors. It’s a small country but packed with fascinating sights and most visitors will want to see the ancient jungle-clad temples of Angkor, the capital of Phnom Penh and the beaches of the south coast. It’s also possible to take a cruise on the Mekong River.

The dry season in Cambodia runs from October to April with the best weather arriving between December and March (average temperatures between 25°C and 28°C). During April and May temperatures reach an average of 33°C.

The wet season runs from May to October, with 75% of the country’s annual rainfall falling during this time. Due to its proximity to the equator, the season is characterised by heavy monsoon rains, generally starting in the afternoon or evening, leaving mornings clear.

It’s worth spending several days at Angkor a Unesco World Heritage Site and home to the largest religious monument in the world. The majority of tourists tend to visit Angkor between October and February when temperatures are at their coolest. This is also the most expensive time of year, particularly during Christmas, New Year and Chinese New Year, when an influx of tourists pushes up prices. Many hotels are fully booked.

Towards the end of the dry season (mid-February to May) temperatures rise considerably making exploring the temple complex hard and uncomfortable work.

During the rainy season (May to October) tourists numbers decline, meaning availability and lower prices. Generally mornings are clear and sunny so sightseeing should be unaffected. Angkor is also a lot greener and certain temples’ waterways are refilled showing another dimension to the beautiful complex. So the wet season can actually be a good time to visit Angkor.

Phnom Penh is a rapidly changing city. As foreign investment has grown, the skyline has filled with skyscrapers. At its heart and amongst the traffic chaos is a welcoming, laid back city filled with coffee houses, boutique shops and exciting local markets.

There are two key dates that may affect a visit to the Cambodian capital. Over Khmer New Year in April many Cambodians leave the city to see friends and family resulting in local sites closing. Tours to important sites such as the Killing Fields or Tuol Sleng Genocide Museum should be unaffected, but local markets, such as the Russian Market, and restaurants may close.

Another important date in the Khmer calendar is Bon Om Tuk or the Water Festival held in either October or November. Phnom Penh’s population doubles in size as boat races take over the Mekong River. While this can be a fascinating site, it can also present challenges. The promenade alongside the royal palace and riverside overflows with spectators and there’s an increased risk of pickpocketing. Again, many local businesses will close during the water festival.

A beautiful way to see Cambodia and travel to Vietnam is on a cruise along the Mekong River which runs north to south. Katie Cosstick, public relations manager at Cox & Kings says: “Time of year can affect the Mekong cruises to or from Ho Chi Minh City, the Vietnamese Capital.” She advises travelling between mid-September and the end of December, when water levels are at their height. Rivers start to run dry from January onwards.

If you want to travel by boat between Phnom Penh and Siem Reap, you should pick the high-water season. In the low-water season the river is so low at Tonle Sap lake that boats are unable to dock at the usual Siem Reap port. Instead they have to dock at Kampong Cham and take a 4.5-hour transfer rather than the usual 45 minutes.

Cambodia’s South Coast retains its original charm – offering beautiful beaches without the crowds that neighbouring Thailand attracts. While a lot of accommodation is basic, there are more upmarket options readily available.

The islands of Koh Rong and Koh Rong Saloem have long a favourite destination of backpackers with unspoilt views, jungle bordering dazzling white sand and crystal clear waters. Koh Rong Saloem caters mostly to families with a wide choice of bungalows available on various beaches. With little to no internet connection, limited electricity and an hour-long sea crossing from Sihanoukville, the islands are best visited in the dry season when the seas remain calm and there is a less chance of ferries being cancelled.

Kep, a sleepy old French colonial seaside town, is seeing a new wave of development and offers a relaxing getaway from Phnom Penh. The best time to visit is December to March in the dry season but during New Year and Christmas accommodation prices will rise and availability will be limited.

* We recommend Cox & Kings for holidays in Cambodia, including luxury tours and tailor made trips. Also see these honeymoons in Cambodia.